“One of the most delightful courses: a rival of Hunstanton and Brancaster for the title of best course in East Anglia”

THE ORIGINS OF ALDEBURGH GOLF CLUB

“In 1885 golf was the eccentricity affected by a few; by 1890 it had become general fashion”

Aldeburgh Golf Club, founded in 1884, is England’s second oldest heathland course and perhaps the thirtieth oldest 18 hole golf course in the world still on its original golfing ground. In 1880 Skelton Anderson first looked into playing golf at Aldeburgh where his wife, Elizabeth Garrett Anderson, had been given a house by her father. Golf was then a little known eccentricity and there were no courses near the sea in the south east of England and East Anglia. However, as a Scottish golfer, he quickly recognised that the open heath near Aldeburgh railway station, with its sandy soil, fine grass and gorse and views over the Alde estuary, would be perfect for golf. And so it has remained.

Skelton Anderson arranged for the Scottish professionals John Thomson, from Wimbledon, and Willie Fernie, from the newly created Felixstowe Golf Club, to lay out the original course. Fernie had recently won the Open Championship at Musselburgh, a victory which no doubt boosted his designer’s fee. After the first Clubhouse was built in 1890, the first hole started with a drive over what is now the main road out of Aldeburgh and was then a rough road. Five holes later, the golfers drove back over the road, eventually completing the Course on what is now the practice putting green.

The influence of Elizabeth Garrett Anderson, the country’s first female doctor and mayor, and Millicent Fawcett, both of whom were members, ensured that Aldeburgh Golf Club is probably the first golf club in the world where women have always had equal membership and playing rights with the men. Perhaps in recognition, the English Ladies Amateur Championship has been played five times at Aldeburgh: in 1938 there was not a dry eye as the local champion, Joy Winn, lost in the final in the week Neville Chamberlain went to Munich to meet Hitler. 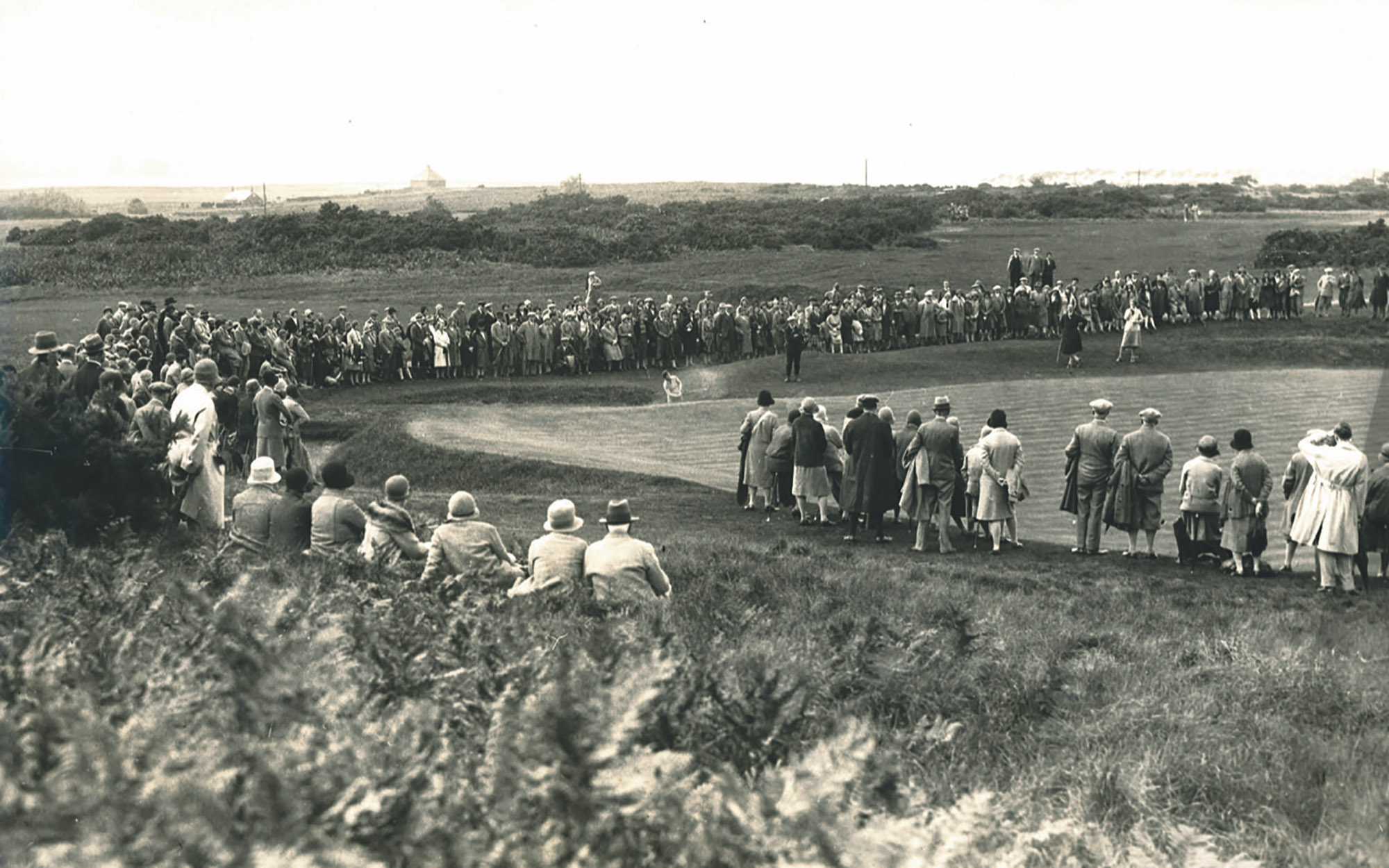 In 1907 the Club lost the use of the holes south of the road and the course had to be modified. This also gave the chance to take account of the new rubber cored ball introduced in 1902 which had made some of the early courses obsolete. Willie Park Jnr, also an Open champion and one of the best of the early golf professional architects, was asked to make the main changes. JH Taylor, the third Open Champion to have had a hand in the course, was asked to put in new bunkering at a cost of £180. His great grass banked masterpieces are still visible today, recognisable by their sweeping banks which curve both vertically and horizontally; particularly impressive on the cross bunkers on the second nine.

In 1922 Harry Colt and Hugh Alison made the final structural changes to the course, designing the splendid finish from the 14th hole, which stands hard by the Red House where Benjamin Britten composed some of his most important work. In the 21st century new tees and tighter bunkering by Ken Moodie have ensured the Course remains a demanding test even for the best golfers.

Aldeburgh has always been a favourite course and club for the golf writer. For Bernard Darwin, Aldeburgh was a particular favourite and it was where he taught his children to play, costing him many balls in the gorse bushes. Many years later Aldeburgh saw Darwin play his last golf shot, a four iron to the 9th green. Frank Pennink, a Walker Cup player, gave Aldeburgh a prominent position in his Choice of Golf Courses:

“One of the most delightful courses near but not quite on the sea: a rival of Hunstanton and Brancaster for the title of best course in East Anglia”

The elegant Clubhouse, opened in 1911, commands the opening nine holes of the Course. The Edwardian ancestory of both clubhouse and course can be sensed from the old fashioned Smoke Room and from the Terrace. But throughout its history Aldeburgh golf course has been unforgiving to those trying to play in par and the amateur and professional course record remained at or above par until John Lloyd’s 65 in the special medal to celebrate the Club’s centenary in 1984. Aldeburgh has been the venue for many important events including, in the 21st century, the English Ladies Championship in 2003, the Oxford v Cambridge University match in 2007, the English County Champions in 2009 and the English Senior Amateur Championship in 2012.

The charming nine hole river course on the south facing slopes overlooking the Alde estuary was opened in 1975. 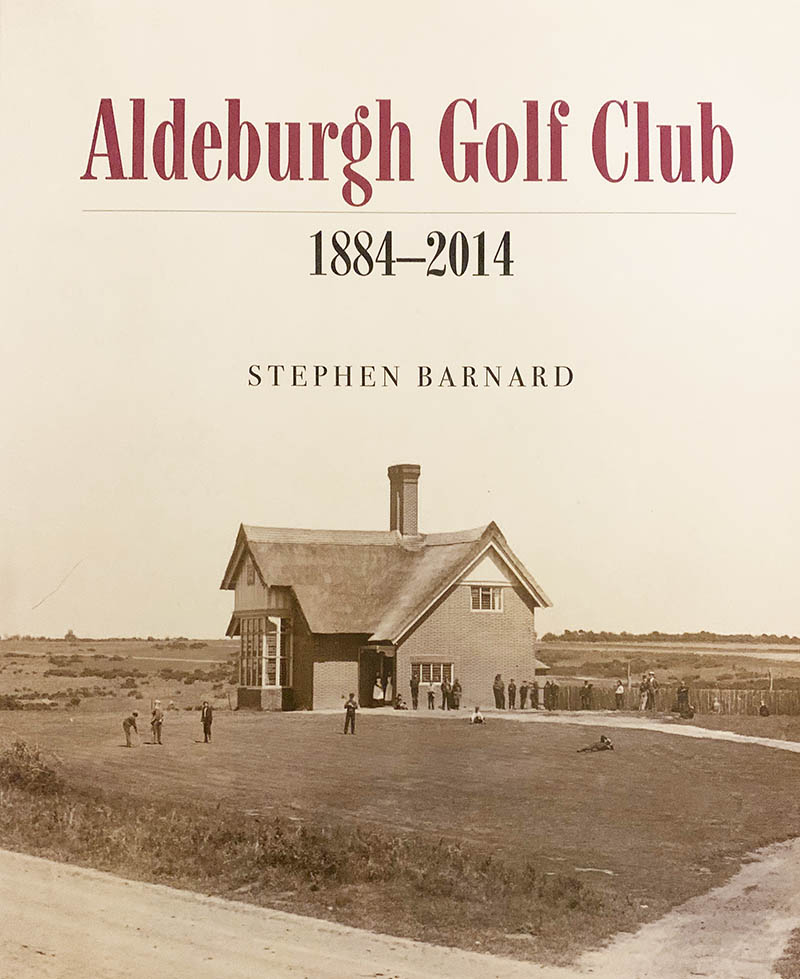 Stephen Barnard’s recently published book “Aldeburgh Golf Club 1884” is a hardback of 272 pages, handsomely designed with full colour throughout. The cost is £30 plus postage and packaging (£6.50 for the UK)

FIND OUT MORE
We use cookies on our website to give you the most relevant experience by remembering your preferences and repeat visits. By clicking “Accept All”, you consent to the use of ALL the cookies. However, you may visit "Cookie Settings" to provide a controlled consent.
Cookie SettingsAccept All
Manage consent