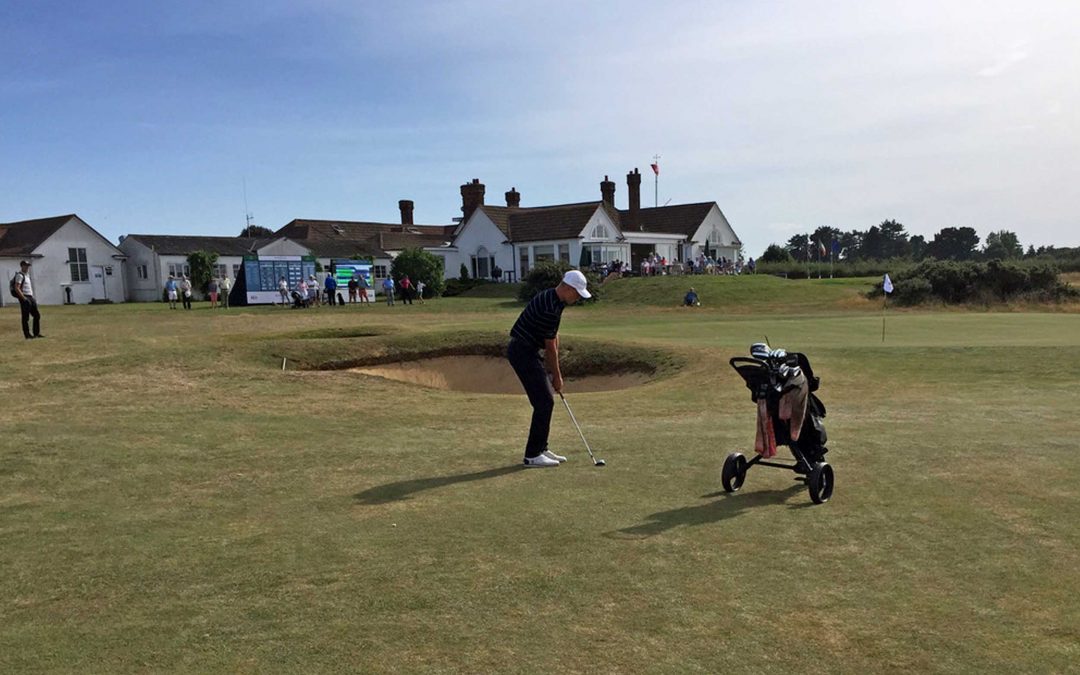 The Jacques Léglise Trophy is the under-18 equivalent of the St Andrews Trophy. It is played annually with the venue alternating between Great Britain and Ireland and the Continent of Europe.

Many of today’s top professionals, like Luke Donald and Sergio Garcia, have contested the Match in the past.

The Continent of Europe have won the 2019 Jacques Léglise Trophy after defeating Great Britain and Ireland 15 ½ – 9 ½ at Aldeburgh Golf Club in England.

Leading their opponents 6½-5½ at the start of play on the second day, the Continent of Europe consolidated their lead winning three of the four morning foursomes matches providing them with a three-point advantage at 9½-6½ going into this afternoon’s singles matches.

Joachim Fourquet’s side then picked up six of the nine available points in the afternoon singles to seal their first win in the boys’ international match since 2017 when they triumphed 15½-9½ at Ballybunion in Ireland.

“I am very, very proud of my team, they showed a lot of things this afternoon. First of all, they showed that they are not just 16, 17 or 18 years old, they are real players – they know how to manage the course,” said Joachim Fourquet the non-playing captain for the Continent of Europe team.

“It was so different to yesterday afternoon, with the attitude and everything, they played really well this afternoon.

“The thing with the European team is you have 48 hours to create team spirit, it was better and better as the week went on. I could feel it last night, they were all talking and joking so I think today we were a real team, yesterday it was 75 per cent and two days ago it was 50 per cent. The attitude and team spirit was amazing today.”

“There were a lot of positives, I think the guys changed their approach a little bit to put the challenge up to the European guys this afternoon but unfortunately they were just too strong for us,” said Stuart Wilson Chairman of The R&A Boys Selectors, Great Britain and Ireland. “They kept the ball in play a little more than us and holed a few more putts and in the end that makes all the difference.

“We knew they were going to be good, they definitely brought a strong team but we were hopeful with the guys that we had assembled and confident coming into the match that we could repeat a result from Finland last year but it just wasn’t to be I am afraid.

“It will be nice to be up in Scotland at Blairgowrie, it’s a cracking course up there, the players will enjoy it and they have another a year to get ready for it.”

The visitors strengthened their grip on the contest in the morning foursomes. While Ben Schmidt and Archie Davies combined well to defeat the French pair of Charles Larcelet and Tom Vaillant, it was the only point to go toward the GB&I team tally in the early session.

Adam Wallin and Loic Ettlin were too strong for the fancied GB&I pairing of Barclay Brown and Joe Pagdin. The European duo recorded a convincing 4&2 victory.

Bård Bjørnevik Skogen and Matteo Cristoni were always in control of their match over Connor McKinney and Aaron Marshall winning the point two-up.

While Tom McKibbin and Josh Hill held the early advantage in their match against Daniel da Costa Rodrigues and David Puig the European pair fought back from being two-down after three holes and squared the match at the 6th hole. At the 14th the GB&I pairing again gained an advantage that was quickly lost at the next. With da Costa Rodrigues and Puig winning the final two holes of the match they went on to seal the Continent of Europe’s third point of the morning.

With Europe needing just three and a half points from the nine singles matches in the afternoon, Charles Larcelet was the first to strike. He landed a big blow to the GB&I team, fighting back from three-down after five holes to defeat Ben Schmidt, the highest ranked player in the field, 2&1.

Adam Wallin staved off a late charge from Connor McKinney, defeating the Scott 2&1 to provide the Continent of Europe with its second point in the singles matches.

Now needing just half a point to win the 2019 Jacques Léglise Trophy it was xx-year-old Loic Ettlin who secured the victory for the Continent of Europe when he disposed of Luke O’Neill 4&3.

David Puig and Daniel da Costa Rodrigues also secured points of the Continent when they won their matches against Aaron Marshall and Tom McKibbin.

Playing the first singles match out in the afternoon, Joe Pagdin did his best to mount a comeback for GB&I. In control from the start, Pagdin defeated Alvaro Mueller-Baumgart 3&1.

However, with the Continent of Europe claiming the next three matches, the GB&I had left their charge too late.

Barclay Brown, the playing captain for GB&I, won his match against Matteo Cristoni putting on an impressive display to fight back from three-down at the 8th hole to win 2&1 on the 17th.

Josh Hill claimed GB&I’s final point at the 2019 Jacques Leglise Trophy when he recorded a one-up victory over Tom Vaillant.

The Continent of Europe wins

We use cookies on our website to give you the most relevant experience by remembering your preferences and repeat visits. By clicking “Accept All”, you consent to the use of ALL the cookies. However, you may visit "Cookie Settings" to provide a controlled consent.
Cookie SettingsAccept All
Manage consent